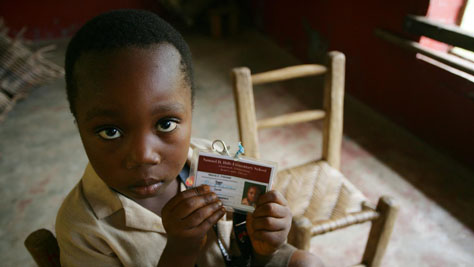 © UNICEF/NYHQ2007-0603/Giacomo Pirozzi
Morris Freeman, 5, holds up his identification card at Samuel D. Hill Public School, a combined primary and secondary school in Tubmanburg, capital of the north-western Bomi County in Liberia. UNICEF supports the school's Accelerated Learning Programme (ALP), which condenses six years of primary schooling into three to enable children to make up for years lost to armed conflict..

The MRM generates information for four main categories of report to the Security Council:

Even though these four categories of report are different in structure, in general monitoring reports should provide concise descriptions specifying incidents of violations (What happened and to whom?); locations and period of the incidents (Where and when did the incidents take place?); and identity of parties responsible for perpetrating the violations (Who committed the violations?).

It should be stressed that all MRM information should be used at first hand for local-level advocacy and response interventions.