Termination of the MRM 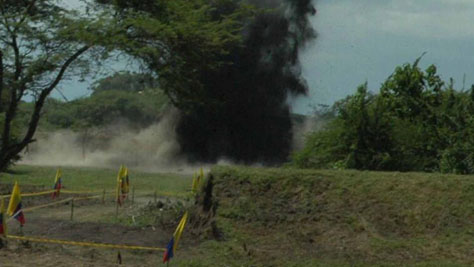 © UNICEF/NYHQ2004-0743/Courtesy El Heraldo
A large plume of fire and smoke shoots skyward following detonation of anti-personnel landmines outside the northern port city of Barranquilla, Colombia, where more than 6,800 mines belonging to the Colombian Armed Forces are being destroyed.

The MRM is terminated in-country when all parties have been delisted for one cycle of the Secretary-General's Global Annual Report. Parties can be delisted when the UN verifies that violations for which the party was listed have ended during the previous global Secretary-General report cycle, and Action Plans on those violations have been finalized. In exceptional circumstances where it may be very difficult or impossible to develop an action plan with a party to conflict but where violations have ceased, the UNCTFMR co-chairs should seek guidance from the OSRSG-CAAC and UNICEF headquarters on how to proceed.

In a country situation where all parties to the conflict have been delisted in the Global Annual Report of the Secretary-General on CAAC, the CTFMR should engage in a discussion about the termination of the formal MRM. The co-chairs of the CTFMR should deliberate with their respective headquarters and with the OSRSG-CAAC. An initial informal assessment can ensure a systematic overview of the situation, and gauge that risks and other relevant issues in the short- to medium-term future are properly taken into account. After completing technical-level discussion with the OSRSG-CAAC and their respective headquarters, the CTFMR co-chairs may make a recommendation on this basis in writing to the SRSG-CAAC in New York. Final decision to terminate the MRM will be made with consultation and agreement of the SRSG-CAAC in consultation with the UN Task Force on CAAC in New York.