Engaging with Parties to the Conflict 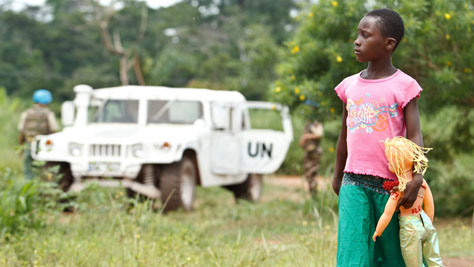 © UNICEF/NYHQ2011-0554/Olivier Asselin
A girl carries a doll past United Nations peacekeepers in the western village of Bahé, Côte d�Ivoire. Peacekeepers are visiting the area in response to reports of armed men threatening villagers.

Introduction to engaging with parties to the conflict

"The United Nations should undertake dialogue for the explicit purpose of child protection with all parties to the conflict, irrespective of whether they are state or non-state parties; non-state parties should be held accountable to international protection standards."52 The MRM Country Task Forces should regularly meet with the parties to the conflict to raise child protection concerns and discuss violations, provided that the identity of victims, sources of information, communities and monitors are protected. As such, it is recommended that credible interlocutors within armed groups or armed forces who have the necessary authority to engage in dialogue on all six grave violations, other relevant child protection concerns and the development and implementation of Action Plans, are identified early in the process, as appropriate. In several country situations, it has been found that when dealing with state armed forces, an inter-ministerial structure can help frame and strengthen engagement from the government.

As stated in paragraph 75 of the Secretary-General�s Report,53 "it is crucial to engage in protection dialogue with all entities whose actions have a significant impact on children, without any implications as to their political or juridical status." The UN-led MRM Country Task Force is also required by Security Council Resolutions 1539, 1612, 1882 and 1998 to develop Action Plans on recruitment and use, rape and sexual violence ,killing and maiming, and attacks on schools and hospitals, with the parties to the conflict to address the grave violations against children for accountability purposes. Action Plans are an essential tool that the MRM Country Task Force has the responsibility of developing with the parties to the conflict in order to enhance the accountability of the alleged perpetrators; respond to and prevent future grave violations against children affected by conflict. Action Plan templates may be found in the annexes, along with the Q&A. The MRM Country Task Force is also responsible for monitoring and reporting on progress and compliance to the Action Plans, to the SCWG-CAAC through the SRSG-CAAC.

Once the Secretary-General's Report on CAAC is published, or the SCWG�s conclusions are publicly issued, the MRM Country Task Force should discuss the key findings, recommendations and a plan of action to follow up on the recommendations with the parties to the conflict. To effectively undertake this area of work, the CTFMR should interact with both national governments and non-state armed groups. Depending on the context and intended outcomes, engagement with these different actors can take several forms, including: advocacy, negotiation, mediation and liaison interactions. These different types of engagement generally share some common elements of process and objectives.

Detailed guidance on engagement with parties to conflict may be found in the further reading section.